FOUNTAIN VALLEY, Calif., Jan. 15, 2019 — Pedego® Electric Bikes today announced a series of new commercials starring William Shatner, who was the guest keynote at its annual dealer conference in December. Shatner, is a real-life Pedego customer who regularly rides his Pedego for exercise and fun, often with his 15 family members spanning three generations.

“At my age, I am riding my Pedego electric bike which makes me feel like a kid again,” said William Shatner. “Electric cycling helps me stay active, get exercise and spend time with my family. And most of all, it’s fun!” he said. He discovered Pedego bikes in 2012 at the Pedego store in North Hollywood where he got his first two bikes for himself and his wife Elizabeth.

“Bill Shatner proves that age is just a number. Riding a Pedego is fun and great exercise for all ages,” said Pedego CEO and co-founder Don DiCostanzo. 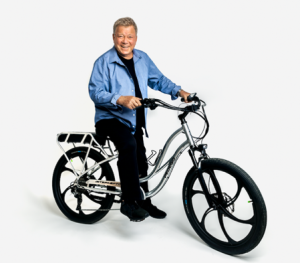 As an accomplished actor and savvy businessman, Shatner delighted in having creative input into Pedego’s “The Chase” commercial.

“I had great fun making these electric bike commercials. You could say I got a charge out of doing them,” said William Shatner.

“It’s not every day you get to work with a legend and an icon. Mr. Shatner not only brings his one-of-a-kind personality to the table, he truly believes in the product he is endorsing,” said Steph Sebbag, Bgp CEO and partner. “He’s one of Pedego’s biggest fans! And that adds a lot to the story. We are also advocates of the brand and enjoy witnessing how it’s inspiring communities of people to get out, have fun and be active.”

Bpg is a full-service, award-winning creative advertising agency operating at the intersection of brands and the entertainment industry. Through a 360° approach Bpg conceptualizes clean, cutting edge and comprehensive campaigns, with big-picture thinking. Bpg clients include Netflix, Marriott, Spectrum, Uber, Warner Bros and more.

The commercials will begin airing in mid-January on Google, Facebook, and other outlets nationwide.